Ethereum Could Drop Towards $300: Trader

Ethereum is preparing to drop around 20-25% towards $300 as the cryptocurrency sees multiple wicks into the ~$420 macro range high, one trader suggested on August 11th:

“$ETHUSD – 3 weekly wicks into the range highs thus far, Leaning towards a local top being formed. Looking at $300 level to long a pullback / bounce. Or flipping the range highs to get long again.”

The trader sharing this chart comes shortly after he noted that both Bitcoin and Ethereum are technically weak on a macro scale, despite prices consolidating near range highs:

“Im only considering 12k+ btc prices once it closes convincingly above the HTF mid range.  Until then, expecting lower prices to get back fully into bitcoin and possibly eth,” the analyst wrote discussing how ETH could move lower.

This trader isn’t the first to have discussed Ethereum retesting $300 in the weeks ahead as the bull trend stalls.

As reported by Bitcoinist previously, one trader shared this chart late last week. It shows that ETH could drop towards $300 as that would align with the “Fibonacci and horizontal confluence.”

Bitcoin Bulls May Still Be in Control

While Ethereum may look bad, Bitcoin does not look as worse for wear, say analysts. As ETH does follow Bitcoin sometimes, this may suggest that the cryptocurrency may not fall as far as some expect.

A cryptocurrency trader shared the chart below just an hour ago as of this article’s writing. He remarked that since Bitcoin bounced off the $11,300 range, it remains in a bullish short-term state. He expects this consolidation to resolve higher towards $12,000, then onto “untapped highs”:

“$BTC cleaned up some lows and finally filled the inefficiency on the move up. Fib cluster and 8H demand providing support for now. I think we march to $12k from here, untapped highs look ripe. HTF trends in tact, sitting on HTF support just below for context. #Bitcoin.” 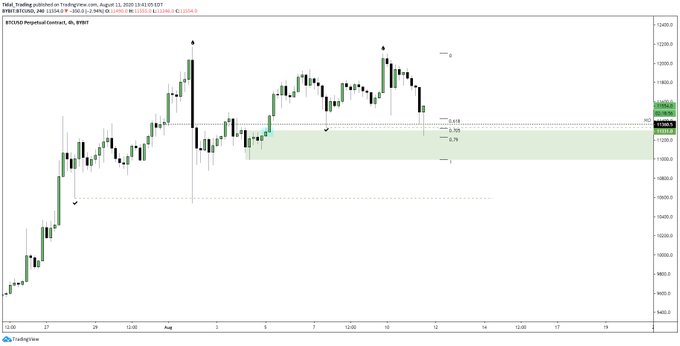 Bitcoin and Ethereum, though, may be influenced by macro trends that deny the bullish scenario from playing out.