An overnight rally in the Bitcoin market paused midway as Donald Trump rejected a nearly $900 billion stimulus bill that passed both the Democrat-controlled House and the Republican-held Senate.

The bitcoin-to-dollar exchange rate slipped 1.13 percent to $23,554 in the pre-European session Wednesday. Traders apprehensively reduced their exposure to the cryptocurrency, anticipating that a delayed stimulus package would aid the US dollar’s rebound. The greenback is trading above its two-year low.

Technically, Bitcoin’s price moves appeared choppy. The flagship cryptocurrency kickstarted the week in a negative area on profit-taking sentiment. It also plunged as the news of a new coronavirus mutant turned investors to the US dollar’s safety. Bitcoin fell alongside global stocks and gold. 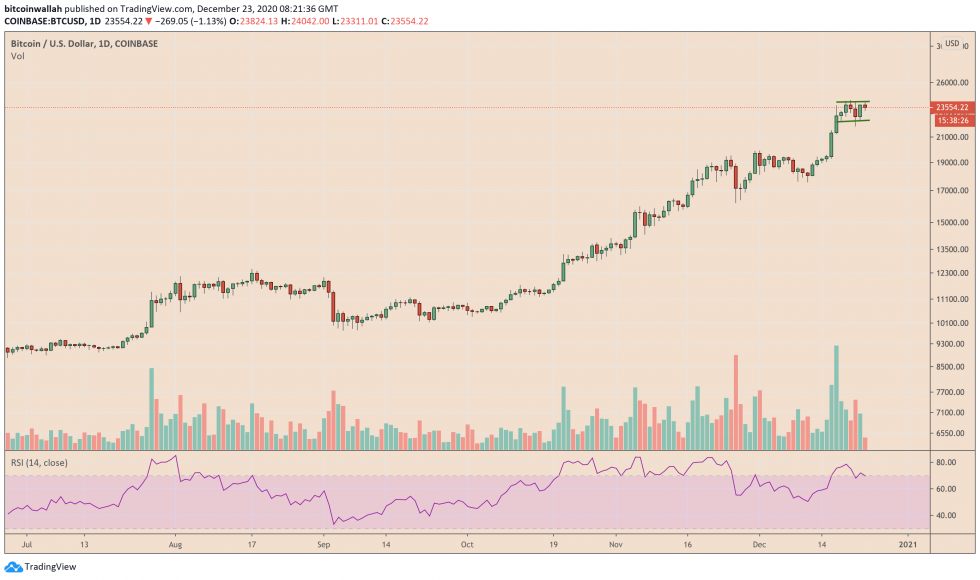 But on Tuesday, its price pared the week-to-date losses by rebounding by 4.81 percent. The retracement came as the US Senate approved the $900 billion stimulus package that would provide critical economic relief to American households and businesses affected by the COVID-19 pandemic.

Mr. Trump refused to sign the bill, creating another extension in a bureaucratic process that has taken months to complete. The president said he would ask Congress to “amend” the details, primarily to increase the direct payment of up to $600 to $2,000. House speaker Nanci Pelosi agreed to the demand.

“Democrats are ready to bring this to the floor this week by unanimous consent,” she tweeted. “Let’s do it!”

What’s Next for Bitcoin?

The recent moves in the Bitcoin market trapped its price in a sideways consolidation range. It appears like a Bull Flag, a bullish continuation pattern that forms as an asset pauses its uptrend briefly. Its typical outcome is a breakout to the upside wherein the price rises by as much as the prior Flagpole. 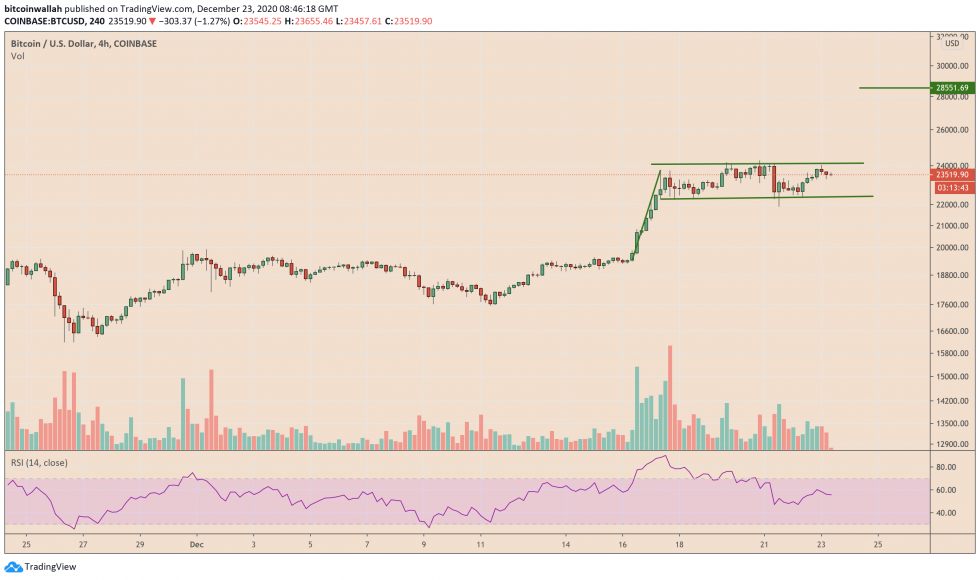 The height of the flagpole is near $4,500. That means the best outcome out of the current consolidation range is a breakout towards $28,500. So it seems, the market fundamentals support the upside bias.

Bitcoin adoption has reached a critical inflection point with the arrival of institutional capital. Mainstream firms and investors are either buying or recommending their clients to buy Bitcoin against the global inflationary outlook upped by piling government debts and fiscal deficits.

“After years asleep at the wheel, institutional leaders are now jarred awake, en masse,” commented Cole Garner, an independent on-chain analyst. “If they want this asset: they’ll have to hustle, compete with the masses and FOMO in above ATH’s. Against a backdrop of scarcity, unlike anything they’ve ever seen.”