Bitcoin and the aggregated crypto market are currently experiencing some mixed trading. While BTC remains stable within the upper-$11,000 region, most major altcoins are currently plunging lower as Ethereum retests its key $400 support level.

ETH’s rather unexpected drop overnight appears to be the primary factor behind this latest decline, and a sustained dip below $400 might be enough to drag Bitcoin lower as well.

Where Bitcoin will trend next will also depend on its reaction to a crucial trendline test that it is currently undergoing.

A break below this level could spark a significant decline.

At the time of writing, Bitcoin is trading down just under 1% at its current price of $11,750. This is around the level at which it has been trading throughout the past several weeks.

It did break this trading range earlier this week and rallied as high as $12,400, but this movement proved to be highly fleeting.

Analysts are now expecting Bitcoin to see further near-term downside, which may come after it tests its key resistance at $12,000.

“If green demand holds we could take out those fairly equal highs before potentially moving lower. Let’s see what we get,” one trader said.

Another factor that may influence Bitcoin’s near-term trend is its reaction to a trendline that has been guiding it higher over the past couple of months.

One analyst put forth a chart showing how strong reactions to this level have been – highlighting its technical importance.

“There we go BTC, 4/4 on the second taps. The decisions are really made here, demand still present to hold or is it time for a deeper correction. Going to be an interesting day.” 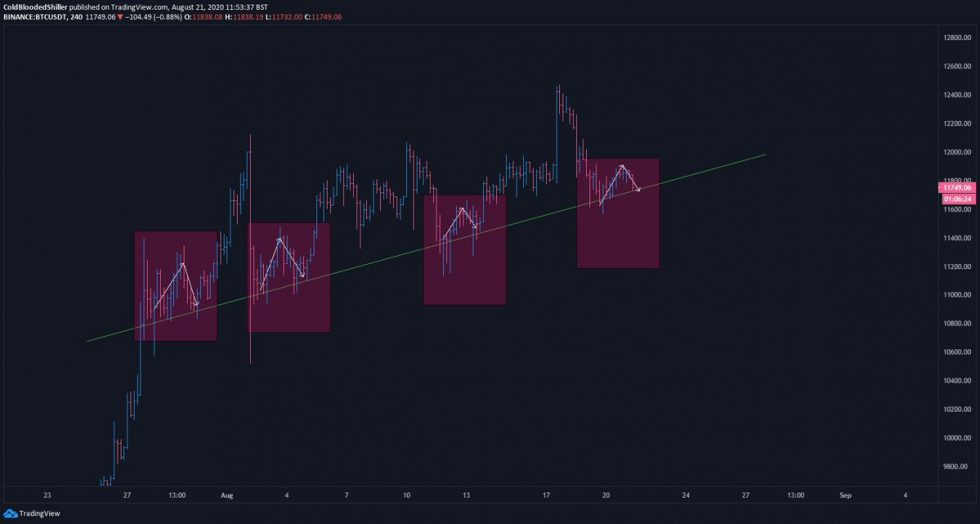 If Bitcoin breaks below this trendline, the cryptocurrency could be in for some major downside in the days ahead.