Traders piled deeper into the Bitcoin market in the early Asian session Thursday, betting on a big hike in sovereign spending under a Democratic-controlled Senate.

The BTC/USD exchange rate, one of the leading instruments by volume in the cryptocurrency space, surged to its record high of $37,810 by Shanghai noon. Its surplus gains pushed Bitcoin’s returns in January to 31.19 percent, bringing it among the world’s best-performing assets heading into 2021. 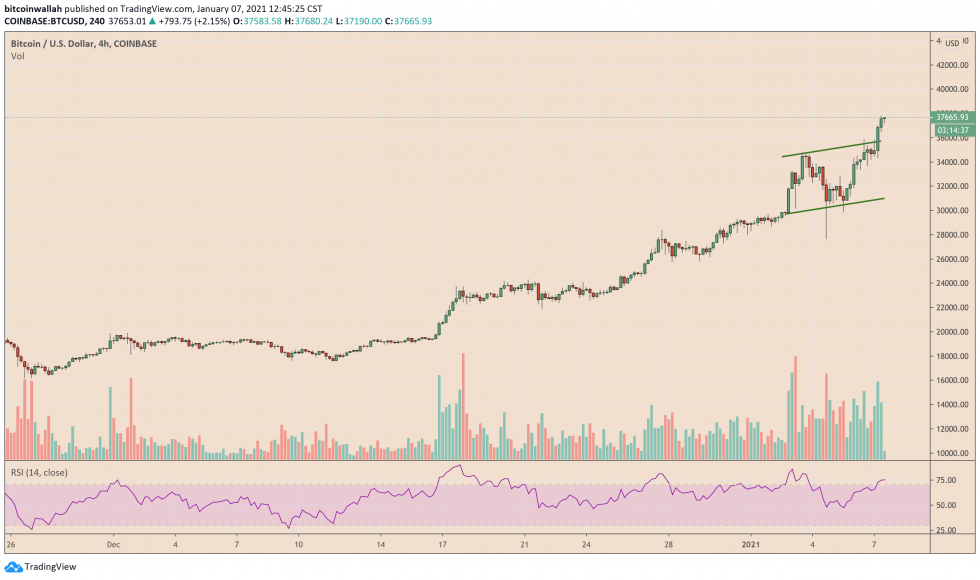 Elsewhere in the cryptocurrency markets, altcoins preferred to tail Bitcoin to mark their individual sessional highs. The second-largest crypto Ethereum jumped above the $1,200-mark for the first time since January 2018. Even a controversial token like XRP logged a 30 percent return on its 24-hour adjusted timeframe, illustrating higher risks and speculation in the market.

A wider upside move across Bitcoin and its rival assets pushed the overall crypto market cap above $1 trillion.

Textbook chart indicators like the Relative Strength Index read the price rally as “overbought.” Veteran trader Peter Brandt highlighted similar concerns in his latest tweet, albeit adding that “Bitcoin is redefining the concept of overbought” altogether that may not concern itself with classic definitions. 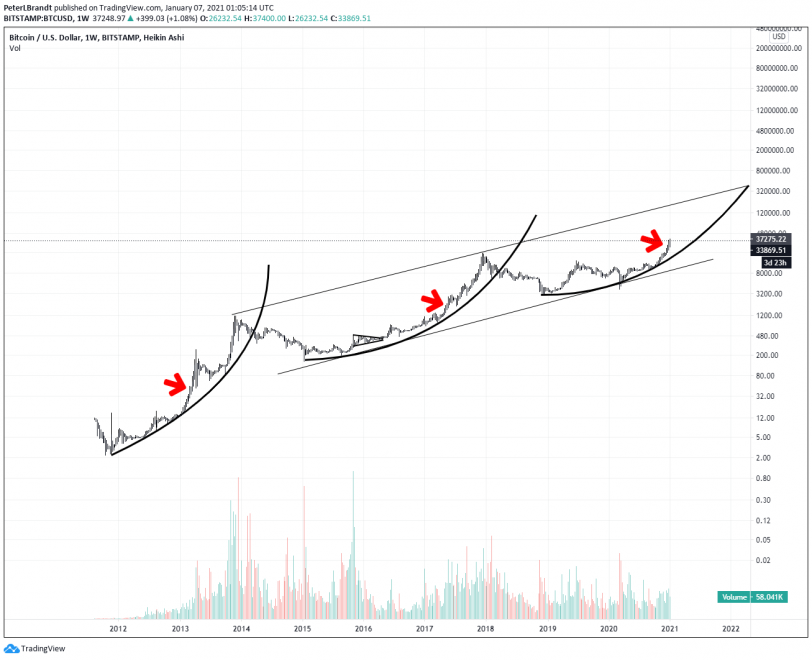 Bitcoin parabolas and correction throughout its history. Source: Peter Brandt

The so-called “midpoints” hinted at a price correction in the short-term but posed those dips as floors that could further increase Bitcoin’s value. The current parabolic trend matures near $320,000.

“There was a time in 2017 shortly after BTC broke its prior high of $1200 in which many [altcoins] went near vertical—pullbacks were virtually non-existent,” added an independent analyst known by his pseudonym Credible Crypto. “We are about to see that again [in my opinion]. Now is not the time to sell the pump- it’s time to sit back and watch the pump, pump.”

The statements left traders with two options: either they could muster up the courage to face larger price corrections and keep holding Bitcoin for potential long-term profits or follow the ‘sell-the-top-buy-the-dip strategy’ to keep their fiat balances higher. In either case, Bitcoin promises to move higher.

That is due to a flurry of bullish fundamentals, ranging from the Federal Reserve’s dovish policies to the US dollar’s depreciating purchasing power. Most recently, the prospect of the pro-stimulus Democrats winning the Senate has further increased the possibility of further dollar declines (it is down more than 12 percent since March).

Bitcoin, which comes with a finite supply of 21 million, and offers people the possibility to conduct transactions and transfer value without central intermediaries, has traded inversely to the US dollar index since March. The cryptocurrency is up 880 percent from its mid-March nadir below $4,000.

“The euphoria is intoxicating, but crypto needs a pullback and consolidation if BTC wants to reach into the $100Ks and ETH into the mid-to-high thousands,” noted Chris Burniske, partner at New York-based investment firm Placeholder. “That doesn’t mean this #crypto bull market would be over, but rather a period to recharge for another wave.”

Is it time to sell? That’s now open to interpretations.

XRP Jumps 21% In Rally By Investing.com