Bitcoin has seen some massive growth as of late, independent from the rest of the crypto market. While BTC rallies higher, most altcoins have posted notable losses that have made it unclear whether an “altseason” is imminent.

There is a strong possibility that where the market trends in the near-term will depend largely, if not entirely, on whether or not Ethereum can gain ground against Bitcoin.

For the time being, this appears to be a somewhat distant event, as the crypto has been bleeding against BTC for weeks now.

However, one analyst is now noting that Bitcoin could soon see a strong correction. This could be just what altcoins need to gain some momentum.

At the time of writing, Bitcoin is trading up just over 3% at its current price of $25,650. This marks a massive surge from its daily lows of $24,000 that were set yesterday morning.

Where the crypto asset trends next will likely depend on whether it faces any strong resistance around $26,000. Because it is entering price discovery mode, there’s a chance that it will just continue rallying daily.

Although Bitcoin’s rally is showing no signs of slowing down at the moment, one analyst believes that a correction is imminent in the near-term.

“I do think the market is nearing a top for BTC. Early warning signs for me are the duration of each consolidation getting shorter with the rallies themselves being shorter. I wouldn’t be surprised to see a 30% correction in the next 4-5 weeks at some point towards 19-20k.” 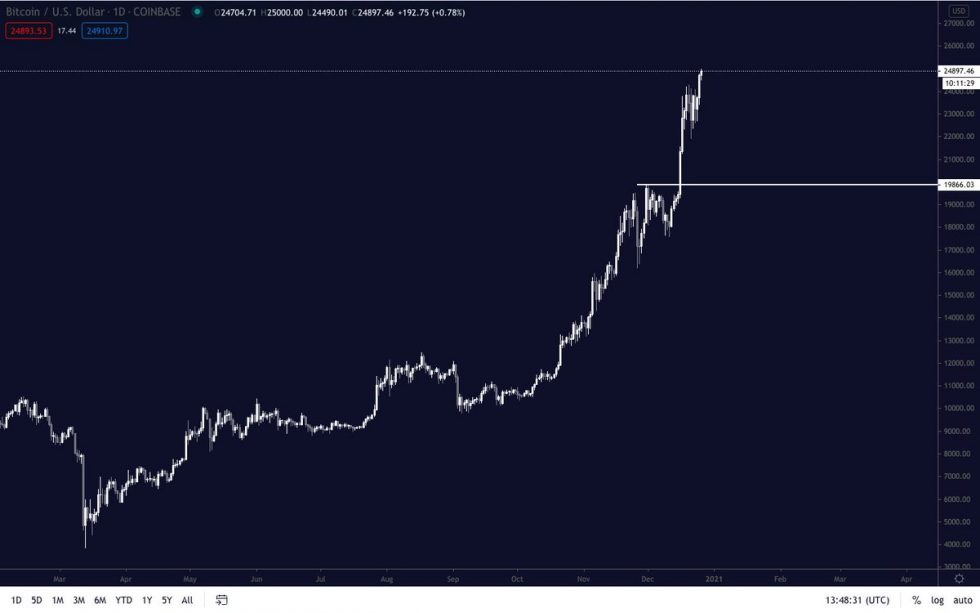 The coming few weeks should provide insights into just how strong and long-lasting Bitcoin’s ongoing rally will be.