BlackRock Downgrades US Treasuries; What It Means for Bitcoin?


BlackRock downgraded its ratings of the US Treasuries even as the government debt emerged as a haven during this week’s stock market sell-off.

The world’s largest asset manager took the bold call after interpreting a clear Democratic win for in the November 3 presidential election in the US. Its strategists noted that a Joe Biden leadership would grow the likelihood of a sizeable fiscal package. Such a scenario would prompt the market to expect higher inflation.

“This is why, tactically, we are downgrading nominal US Treasuries and upgrading their inflation-linked peers,” said strategists Mike Pyle, Beata Harasim, and Scott Thiel, along with researcher Elga Bartsch.

New York-based BlackRock handles $7.8 trillion worth of assets under management, with fixed-income investments covering 68 percent of their overall portfolio. The firm stated that investors have no benefit in holding nominal government debts, mostly as its yields stay meager.

“Such low rates reduce the asset class’s ability to act as ballast against equity market selloffs,” it added.

Instead, BlackRock preferred to put their capital in inflation-linked bonds, a type of instrument that adjusts its principal according to the rate of inflation.

The prospects of a stock market sell-off also move investors into non-yielding speculative assets, such as Gold. The precious metal in the first quarter suffered major downside corrections as investors sold it to offset their losses in equity markets. That was also when the yields on the US 10-year government bond tumbled to its all-time low.

The chart above illustrates the growing inverse correlation between long-dated US Treasury yields and Gold. That said, the deeper the returns on government debts declined, the higher the precious metal climbed. That showed how investors are picking gold as their alternative to US bonds.

Interestingly, one more asset proved its inverse correlation with the US Treasury yields: Bitcoin. 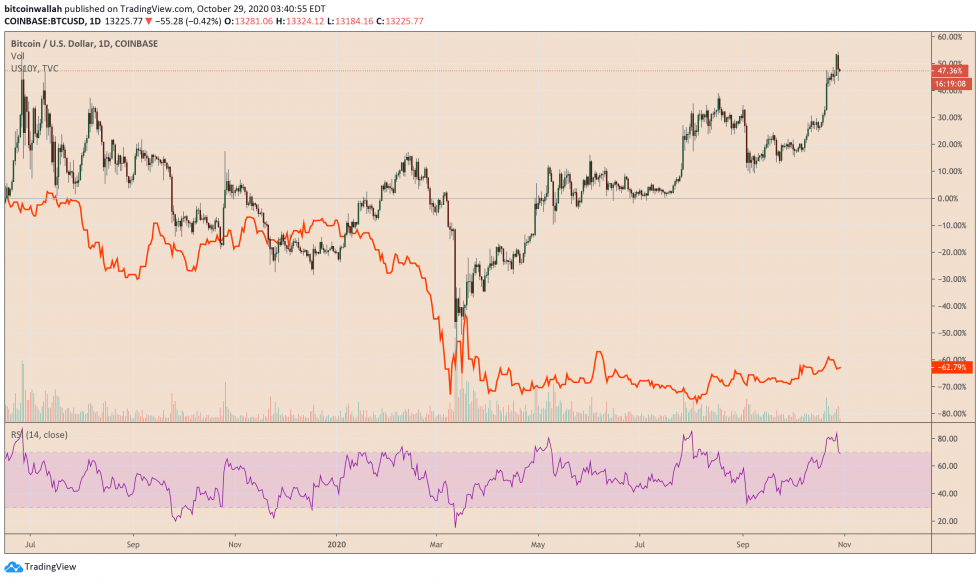 The benchmark cryptocurrency, which rivals gold for its safe-haven spot, surged just like the precious metal after the March 2020 sell-off. Meanwhile, it erratically maintained a negative correlation with the US sovereign debt yields, illustrating that investors were also looking at Bitcoin as their alternative against government bonds.

Based on BlackRock’s assessment of the US presidential election and its potential impact on Treasuries, it is likely for bonds to head further lower in the long-term. While that may increase the yields, the upswing sees limitation due to the Federal Reserve’s vow to prevent a sharp tightening in financial conditions.

We knew the FED has BlackRock in their back pocket but downgrading US treasuries to “underweight” before the election won’t please Donald Trump. Fiscal spending now risks higher yields and a steeper yield curve. Trillions of dollars need a new home.”

He projected Bitcoin as an alternative.

Bitcoin has been under the radar of the the European Central Bank and now the level of monitoring has grown...

Data shows the Bitcoin mining hashrate has continued its sharp plunge in the past week, as miners give up due...

Bitcoin price quickly pushed above the $17,000 level and major US stock indices exploded higher on the heels of some...

Bitcoin Trading Volume Outside Binance Falls To Lowest Since Feb 2021

Data shows the Bitcoin spot trading volume outside Binance has fallen to its lowest value since the February of 2021....