Bitcoin and the aggregated cryptocurrency market saw a sharp decline today that came about after BTC plunged to its near-term support level at $11,400.

This decline occurred following a period of strength seen over the past couple of days, during which time BTC attempted to shatter the heavy resistance sitting at $12,000.

Bitcoin’s continued inability to break through this resistance region seems to point to significant underlying weakness, potentially revealing that bulls are growing weaker by the day.

Traders are now noting that the benchmark cryptocurrency is likely to see some sideways trading in the near-term due to the massive support between $11,200 and $11,400.

At the time of writing, Bitcoin is trading down over 3% at its current price of $11,400. This marks a notable decline from daily highs of nearly $11,800 that were set yesterday.

Because bulls have not been able to break above $12,000 following the decline beneath this level, it will likely continue acting as crucial resistance in the days, weeks, and possibly even months ahead.

One popular crypto analyst is now pointing to a range between $10,900 and $12,370, noting that which of these boundaries is broken first should reveal that crypto’s mid-term trend.

“There’s the range to watch – I expect more sideways with altcoins to continue to make moves. CME Gap meme continues to be unexplored – but doesn’t have to fill. But expect some nice downwards wicks to come – even though any daily close above $10,500 remains bullish,” he said.

Here are the Key Support Levels Bulls Must Defend to Guard Against a Dip to $10,000

Another analyst explained that he is closely watching to see if bulls can defend the region between $11,200 and $11,400.

He notes that a break below this level could send Bitcoin straight down to $10,000. 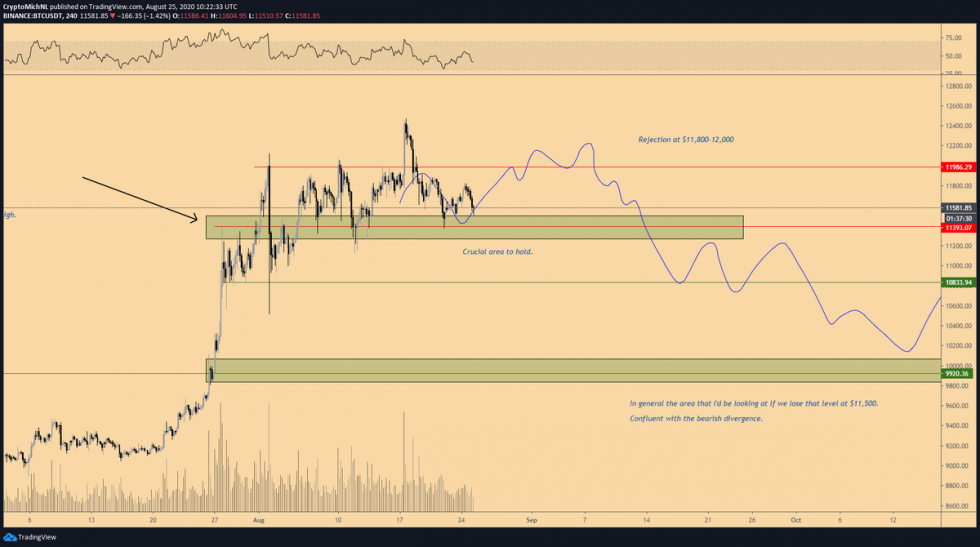 Because the selling pressure currently being placed on Bitcoin is starting to ramp up, investors may soon gain insight into the state of its mid-term uptrend.