Ethereum is set to explode higher in the coming months, Logan Han, a leading trader on Binance recently asserted.

He recently shared the chart seen below, which shows that ETH’s price action looks extremely similar to how it looked towards the end of 2017, prior to the exponential explosion that took place at the start of 2018. This analysis suggests that Ethereum is primed to undergo an exponential rally in the weeks ahead.

Han’s chart suggests that the coin will set a new all-time high towards the end of the year.

Han previously suggested that Ethereum is forming a falling wedge over a medium-term time frame that is set to bring the coin towards $500 in the coming weeks.

This latest prediction is just an extension of this previous prediction.

On a shorter-term basis, analysts see reasons to be optimistic about Ethereum. One trader recently said that if the coin flips $380 into support, it will be cleared to move even higher in the weeks ahead back towards $400:

“ETH / USD: Think the market is looking to make a full recovery if price get flip $380 into support but that said current price action is looking very bullish and its great to have flipped $360. The chance of retesting $280 gets less and less each day we hold above these levels.” 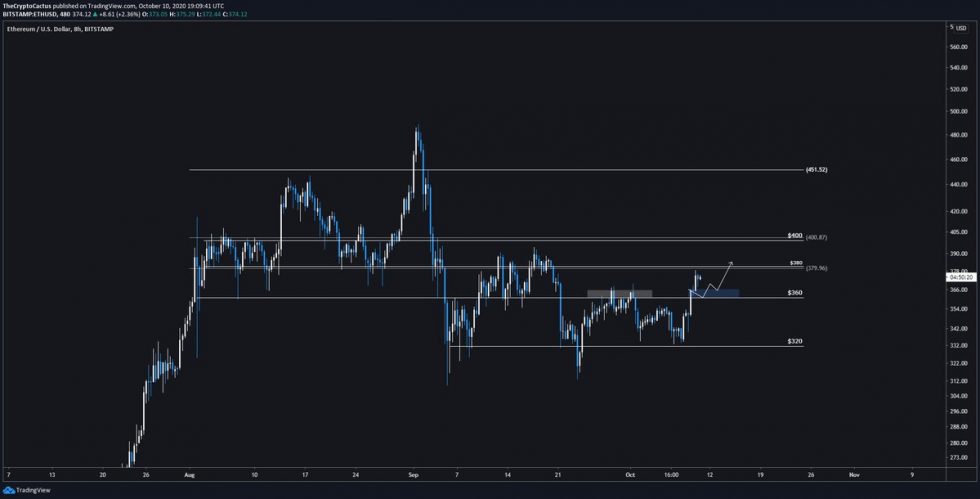 What may stop Ethereum’s ascent in the near term, though, is Bitcoin dropping on news of a delay to the U.S. stimulus bill. The bill resulted in some of the ongoing rally that has taken place in global markets, Bitcoin included.

Ripple (XRP) Price Plunges to $0.22: Can Bulls Save This Key Support?