The crypto-focused sentimental analysis platform highlighted a steep decline in the number of daily active addresses (DAA) on the Bitcoin network. The data reflected that there are now fewer wallets that send or receive Bitcoin on a day-to-day basis. Santiment asserts that DAA correlates strongly with the asset’s price action.

“For example, throughout Q1 of 2019, the DAA were steadily growing way before the market started to recover,” the portal wrote in DAA’s introductary note. “Same holds true for July 2019, when a decline in DAA preceded a decline in price.”

The pattern hinted at repeating in August 2020, it noted. The DAA readings returned two ten percent-long red bars – like the ones seen before the March 2020 crash. They prompted Santiment to expect a fractal echo in the coming sessions, pointing to declines in the Bitcoin market.

“This is a pretty big cautionary indicator that if DAA doesn’t improve soon, a medium to large pullback can take place by the end of August,” the portal predicted. 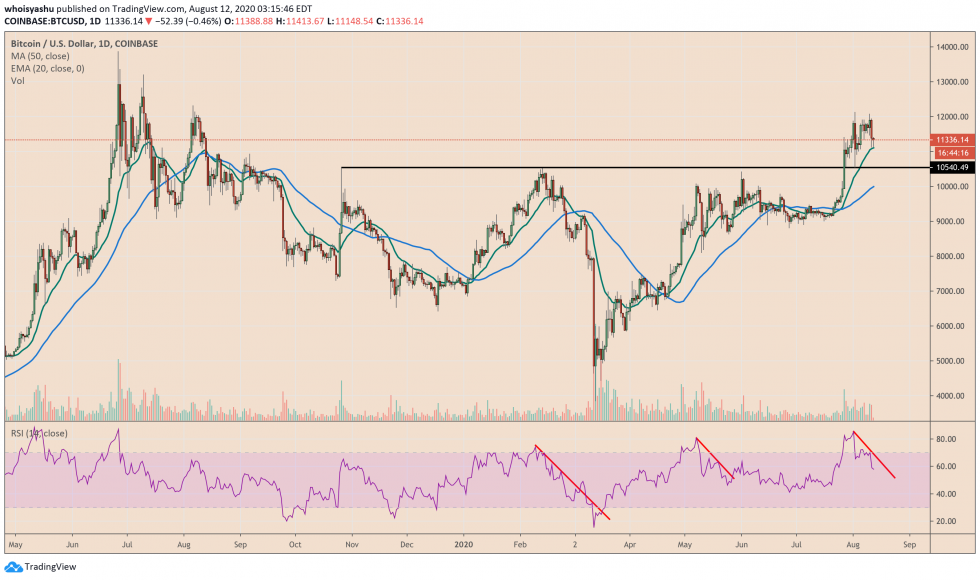 BTCUSD spotted support at its 2o-daily exponential moving average (the green wave). It prompted traders to expect a renewed buying sentiment in the market, with one analyst expecting Bitcoin to head further lower before a full retrace to the upside. He said:

“When you get a bunch of wicks tightly together on the [lower timeframe], it’s an indicator of demand for an asset at current price. It means the asset will very likely go up on the LTF from there.”

The analyst was referring to two back-to-back bounce backs from Bitcoin’s wicks, their tails near $11,000. That showed a reasonable buying demand for the cryptocurrency near the said level.

Santiment also favored a bullish scenario despite its concerns over the falling DAAs. Only this time, the portal referred to Bitcoin’s NVT.

NVT is a ratio of Bitcoin’s Network Value to Transaction. It serves as a barometer to measure the relationship between Bitcoin’s overall network valuation and the worth of transactions that pass through it. A higher NVT shows growth, indicating that investors expect a higher return investment. A lower one, on the other hand, expresses weakness.

As of late, NVT is trending in neutral territory, neither rising nor falling by exponential margins. It is a sign that traders are still in a wait-and-watch mode regarding Bitcoin’s next price moves.

“Unique tokens being moved on Bitcoin’s network have been shuffling back and forth in a neutral state for much of August,” wrote Santiment. “This is actually a welcome sign, as both June and July showed that there was a notable deficit in its NVT that foreshadowed that this recent $12k level was looking a bit too high.”

The portal recommended traders to keep an eye on NVT to predict the next Bitcoin price direction in August.