The United States’ equity markets have seen a relief bounce of 23%, while gold and silver showed a bounce of 13% and 25% as well. However, altcoins have been showing weakness, as Ethereum (ETH) is back to the 0.0205 satoshis level, while XRP (XRP) is now sitting on a crucial level.

What can the markets expect for the XRP price? 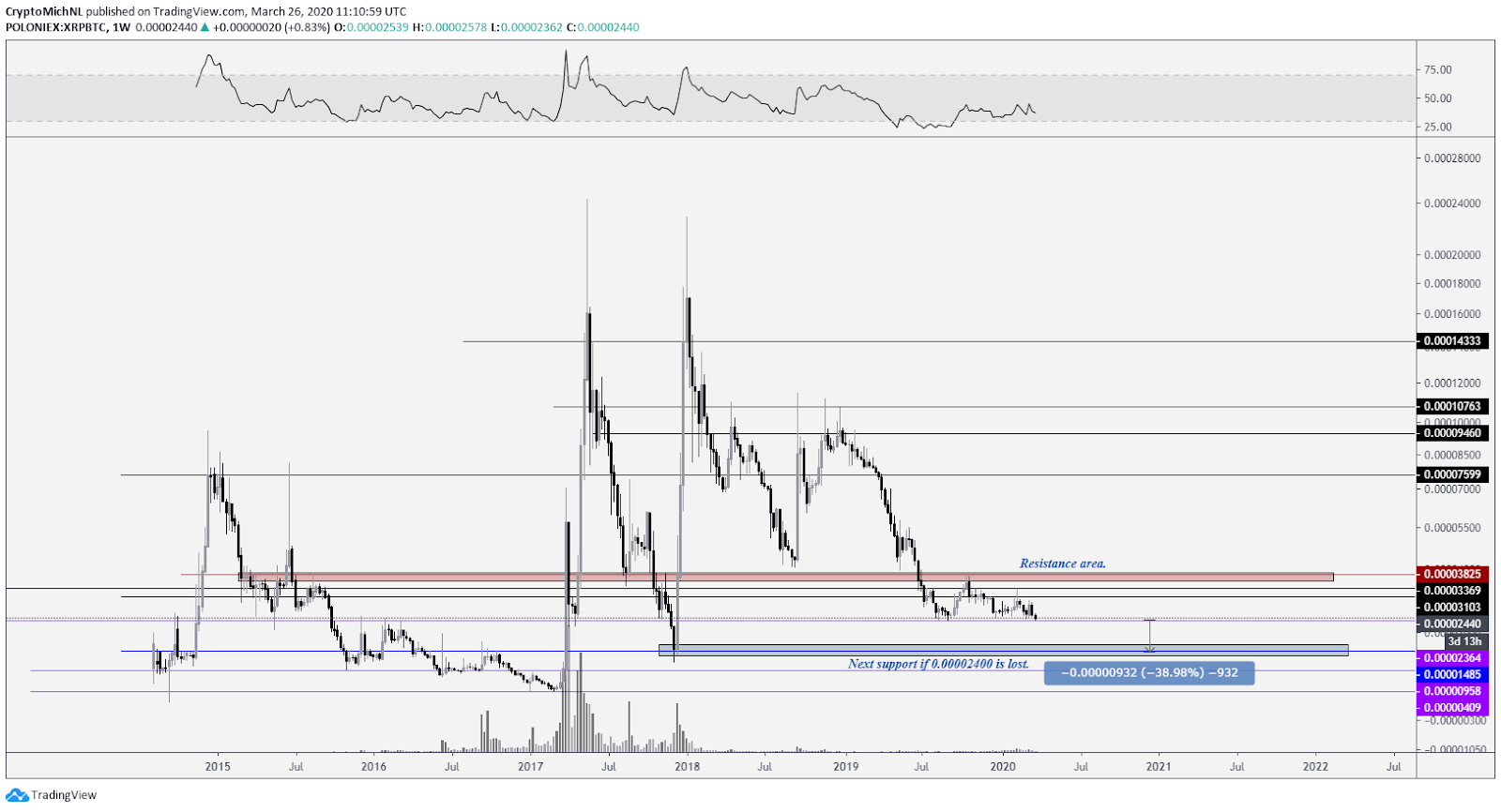 The more often resistance or support gets tested, the weaker it becomes. Given that the support level is tested quite often, traders could expect a downwards break to occur. The moment that the price of XRP drops below this level, a further downwards drop of 40% could be anticipated, as the next support is found at 0.00001400-0.00001500 satoshis. 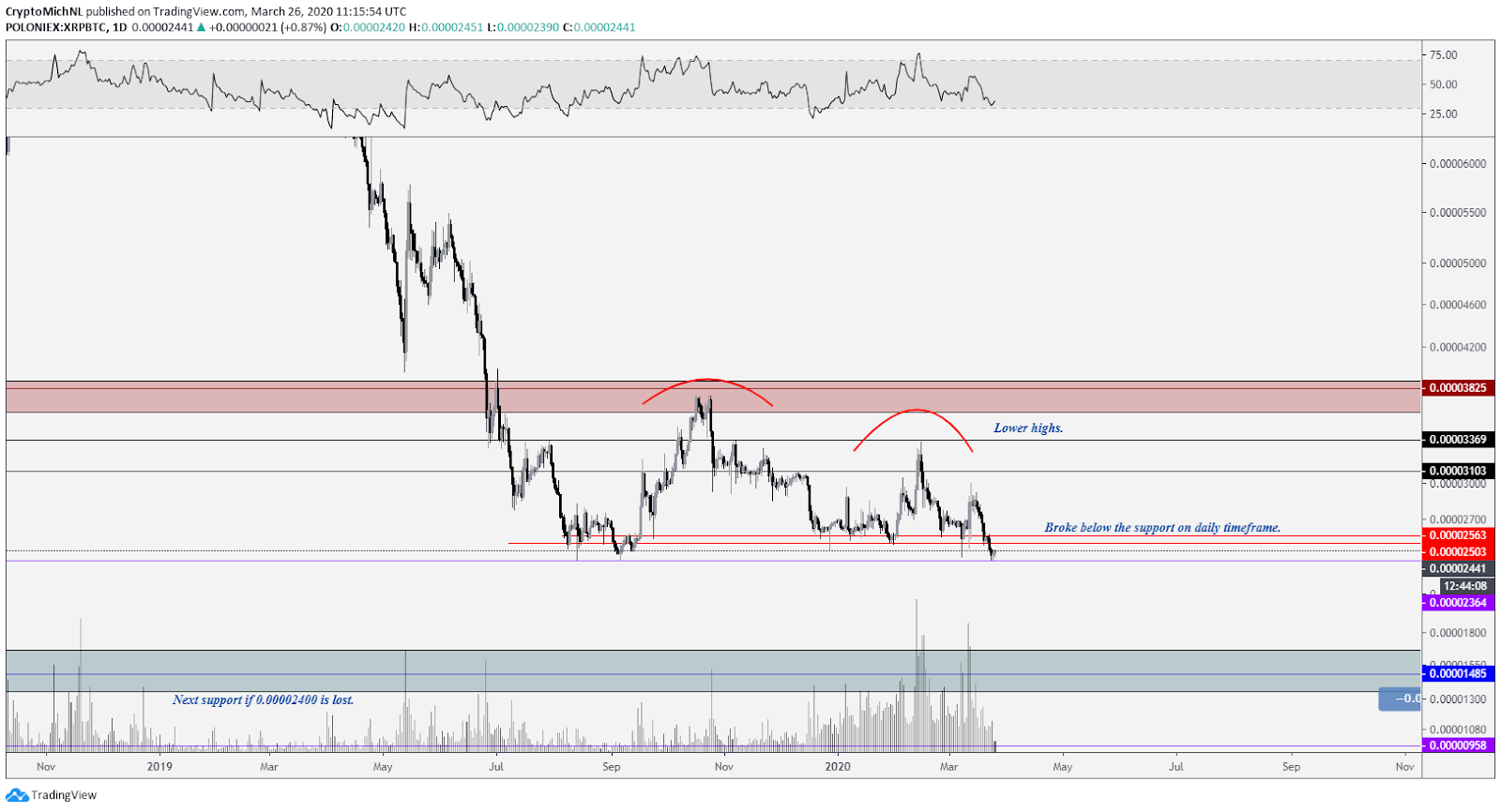 The daily timeframe is clearly showing a downwards trend. The price of XRP is continuously making lower highs, after which the support gets tested many times. Recently, the price of XRP broke below the critical support at 0.00002500-0.00002575 satoshis, which is a basic level to reclaim.

The next step to make a bullish perspective for XRP would be to make a higher high above 0.00003365 satoshis. Given the current market sentiment, such a move seems less likely to occur.

XRP/USD is showing a clear downtrend 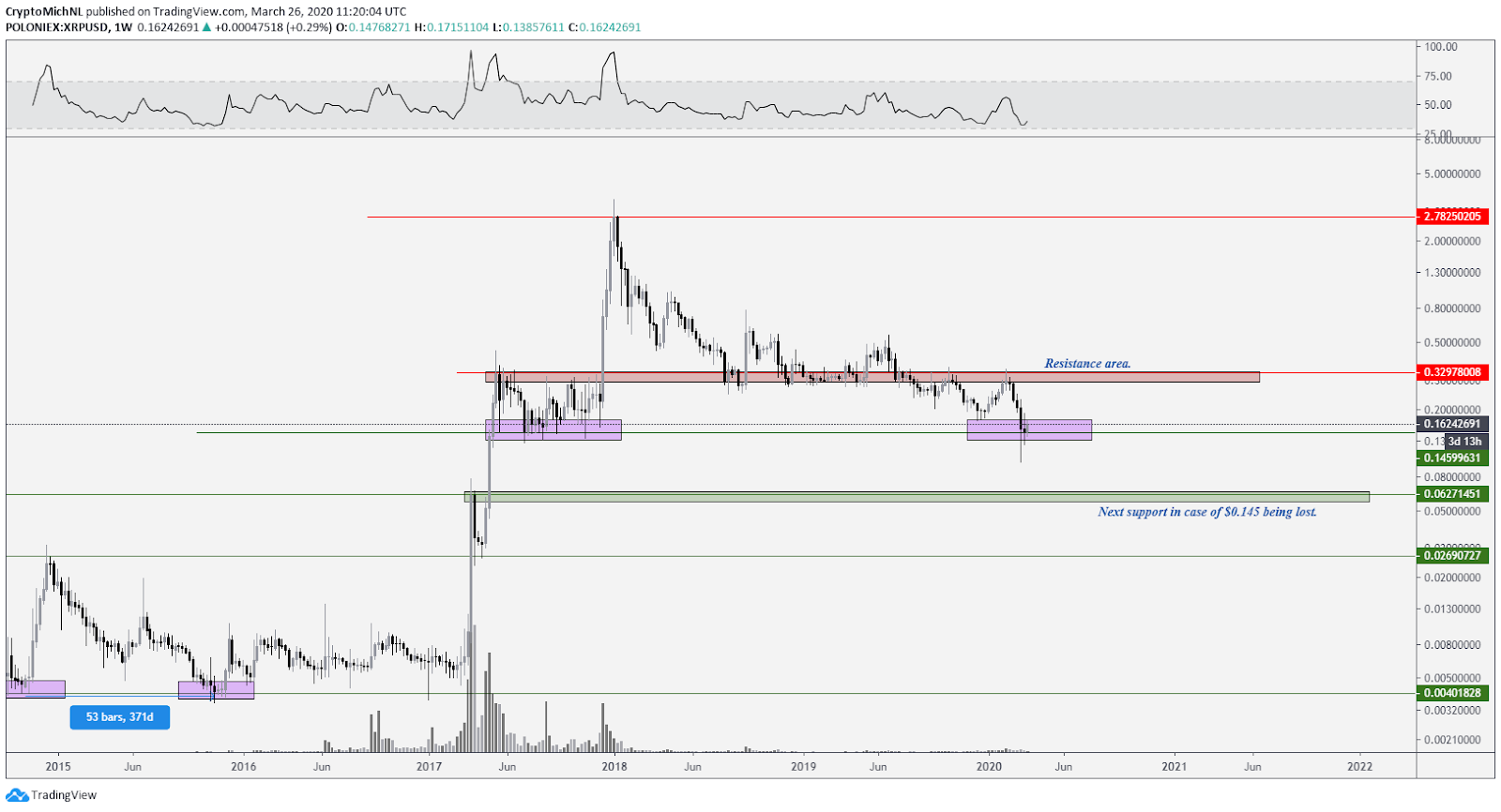 The USD chart of XRP is showing a clear downwards moving trend. The price of XRP is resting on the final support at $0.145, which is crucial. If the price of XRP drops below the $0.145 level, a further downwards drop is likely to occur. Traders should target $0.06 as the next support level in that case.

Such a downwards would be combined by a deep drop on the BTC pair, as discussed previously. However, such a drop would also be caused due to weakness in the cryptomarkets in general.

The price movements are comparable to the movements in the previous cycle, as the price of XRP retraced back to the support level prior to the deep surge in the last cycle too. Similar movements are currently occurring in the crypto markets.

The $0.145-0.15 level is the massive support before the massive 2000% increase in the 2017 bull market. Right now, the price of XRP retraced back to that level, giving all the gains of the previous bull cycle back to the markets. 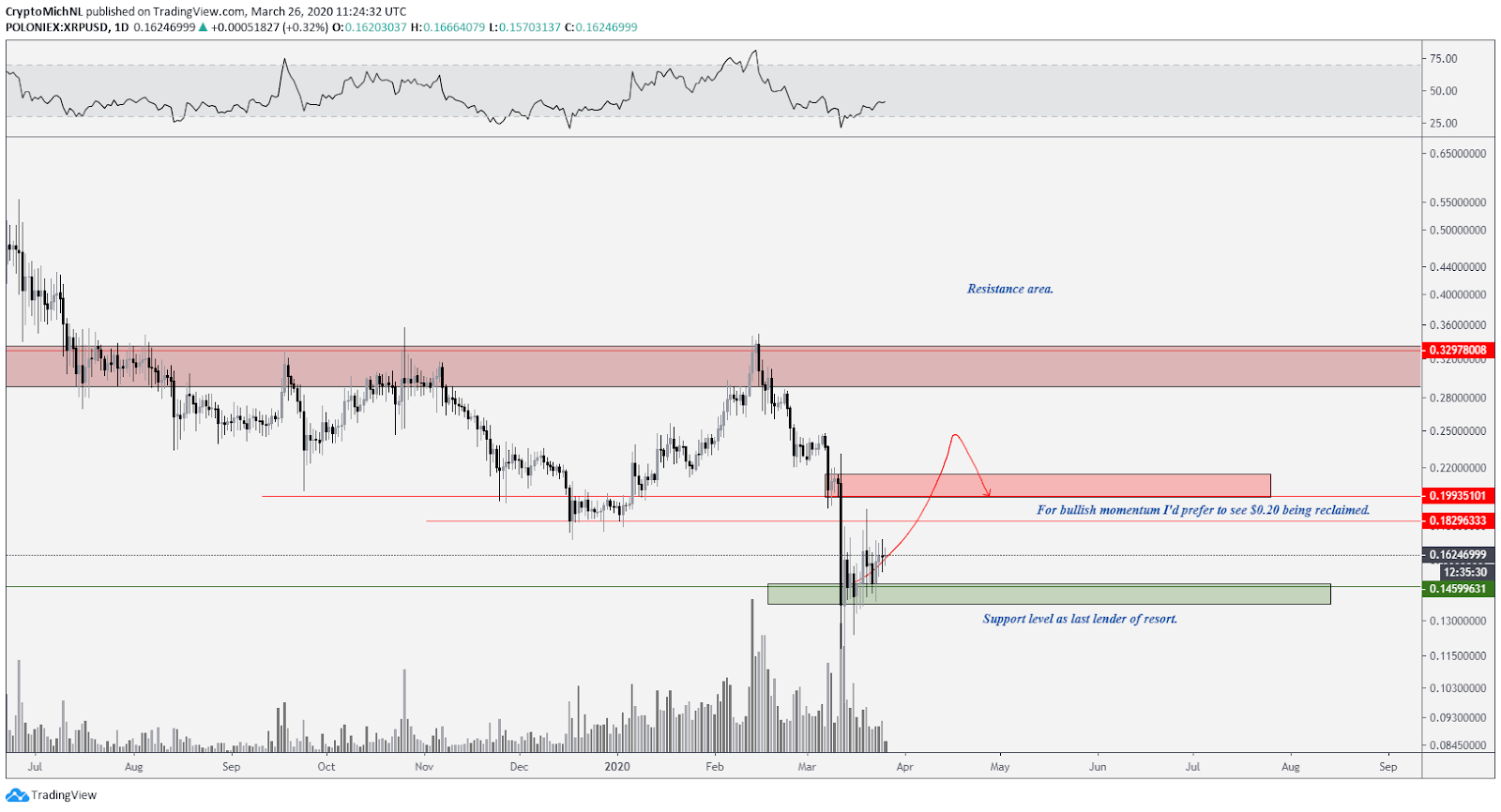 The price of XRP is showing clear support at $0.145 and resistance at $0.182 and $0.20. Is it possible for the price of XRP to become bullish short term? Yes, there are some movements needed to create some bullish momentum.

First of all, the price needs to hold the $0.145 level for support, after which the resistances at $0.182 and $0.20 needs to be cleared to the upside. The moment that XRP reclaims the previous support at $0.20 for support, then there’s a possibility that the price continues to rally towards $0.30-0.33 as the next resistance.

Such a move would confirm that XRP was copying the movements of the previous crypto cycle in 2014-2016. In that cycle, the price of XRP fully retraced the bull move, after which a sideways accumulation period of one year occurred. If the price of XRP moves to $0.32 in the coming months, a similar period of sideways accumulation should be expected.

For further bullish momentum and sentiment, the price should make a new higher high. In that case, the price of XRP needs to move above $0.33 to create one. 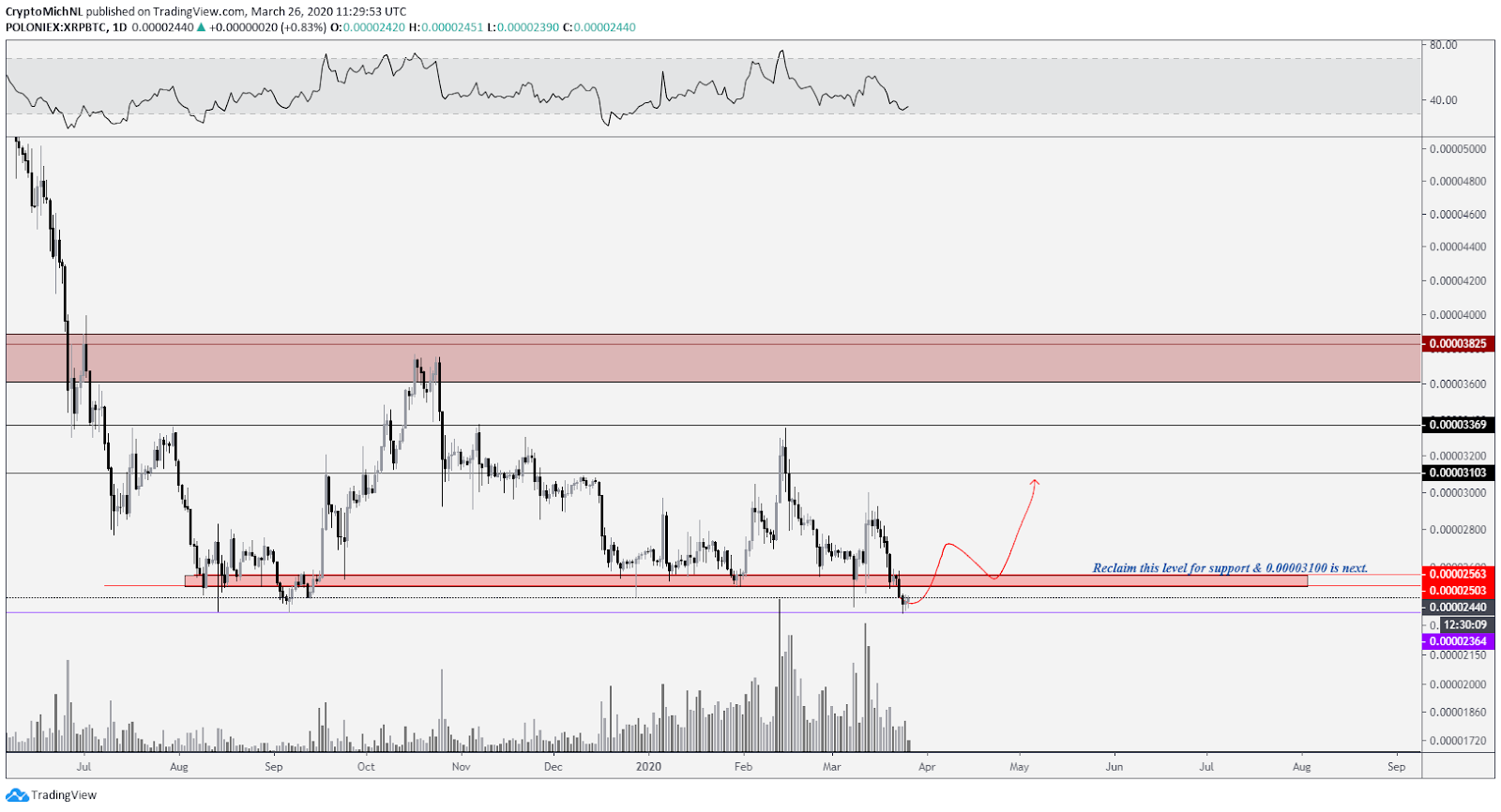 However, a similar conclusion can be made for the BTC pair as for the USD pair. The price of XRP needs to make a higher high above 0.00003350 satoshis to become bullish. As long as that doesn’t happen, then the price remains in a downwards, bearish trend.

The views and opinions expressed here are solely those of the author and do not necessarily reflect the views of Cointelegraph. Every investment and trading move involves risk. You should conduct your own research when making a decision.

Ripple (XRP) Up $0.0041 On 4 Hour Chart, Makes Big Move Relative to Two Week Trend; Price Base in Formation Over Past 14 Days