3 Crucial Reasons Why Bitcoin Could Fall Below $10K This Fall


Bitcoin faces the prospects of breaking below $10,000 after failing to extend a rally that pushed its price up by 70 percent earlier this year.

Here are the top three risks the cryptocurrency is facing as it heads towards the fourth and final quarter of 2020, according to the latest fractals and multiple observations.

#1 Another US Equity Selloff; Bitcoin Correlation

One of the main reasons Bitcoin faces the risks of falling in the coming sessions is the equity market. The cryptocurrency earlier traded higher when the US stocks were doing the same. It also fell alongside the top Wall Street indexes: the S&P 500, the Dow Jones, the Nasdaq Composite.

That made the US equity market an excellent barometer to gauge Bitcoin market sentiments. Even recently, the downside correction in the seemingly overbought tech stocks laggingly coincided with a similar plunge across the cryptocurrency index.

Charles Edwards, the head of the crypto-focused Capriole Fund, recognized the correlation in his Wednesday tweet, stating that uncertainty in risk-off markets is keeping Bitcoin from hitting new higher levels.

The only thing holding it back is risk-off uncertainty and related stock market correlation.

This won’t last forever though.

A move into cash is the likely outcome. The same had happened during the March 2020’s infamous global market rout, wherein Bitcoin and stocks crashed in tandem but the US dollar grew as investors treated it as their safest haven.

If the scenario repeats, then it will put further bearish pressure on Bitcoin. That would lead the cryptocurrency to lower below $10,000.

As stated above, a strengthening US dollar could put further downside pressure on Bitcoin. Analysts believe that the greenback might extend its recovery after crashing to its 27-month nadir in late-August. Part of the reason is an ongoing delay in the second coronavirus stimulus package.

While I’m bullish on Crypto and #Bitcoin I am bearish overall on US stocks. So unfortunately I think stocks dropping will bring those down with it. Election coming up, no stimulus passed yet, US dollar going up, etc. An increase of inflation would be bullish for #Bitcoin though.

The Democrats and the Republicans are at a standoff over the size of the next financial aid to American households, businesses, and individuals battered by the COVID-19 pandemic. Both are still $1 trillion apart in their spending plans, raising worries among investors about a resolution anytime earlier.

Meanwhile, the delay in the stimulus check is prompting Americans to save more and spend less. As the flow of the US dollar becomes more viscous, it also reduces the demand for other assets. That serves as one reason behind the recent selloff in gold, stock, and even Bitcoin markets. 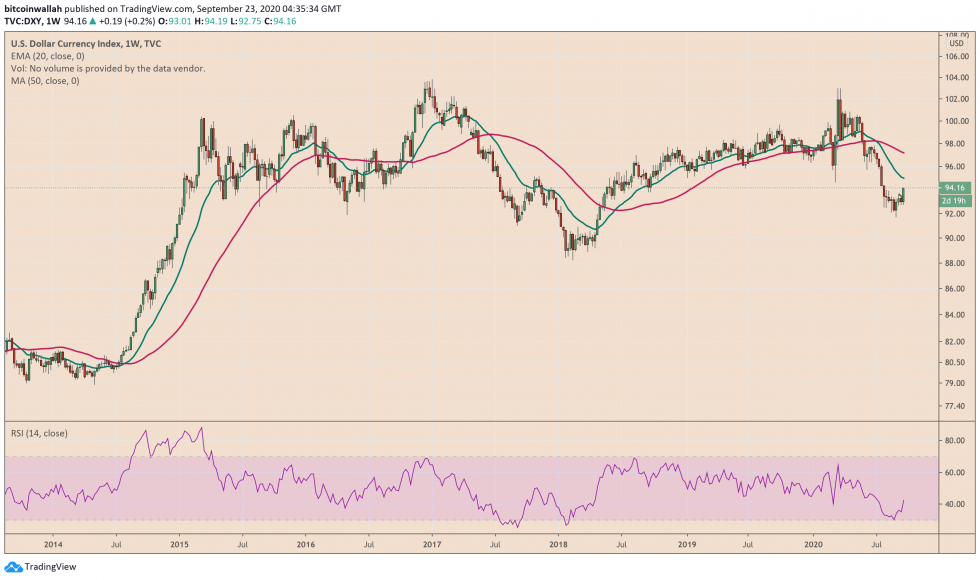 US Dollar Index (DXY) is up 1.25 percent on a week-to-date timeframe. Source: TradingView.com

The dollar expects to grow more as the COVID cases rise in the US and stall the economic recovery. Overall, it might be bad for Bitcoin.

While nobody knows who is winning the US Presidential election in 2020, the uncertainty surrounding the outcome could leave the financial markets in a volatile state.

Gavin Smith, the chief executive of the cryptocurrency firm Panxora, discussed the possibility of elections causing political turmoil. He noted that such a scenario could lead the equities lower, which, in turn, affect Bitcoin and its ability to hold $10,000 as its support.

“The danger to the crypto market is much the same as we saw in March,” Smith said. “If you get that big sell-off in risk assets, there will be that liquidation of bitcoin.”

Simultaneously, the cryptocurrency expects to revive its bullish bias after the US presidential race ends. That is due to an improving long-term fundamental backdrop led by quantitative easing, lower interest rates, and poor bond yields.