Bitcoin exploded above $34,000 for the first time on Sunday, prolonging a record-shattering rally that yielded more than a 300 percent gain in 2020.

Early evidence provided by Ki Young Ju, CEO of the blockchain analytics firm CryptoQuant pointed out that institutional investors purchased about $1 billion worth of Bitcoin via over-the-counter deals. His claim took cues from a so-called Coinbase Pro Outflow indicator that shows the total number of Bitcoin getting transferred to the exchange’s cold wallets for custody.

As Mr. Ju claimed, the wallets back the Coinbase’s OTC services that allow institutional investors to purchase large Bitcoin amounts without influencing the spot market.

Meanwhile, more bullish evidence flew from traditional markets. A recent survey conducted by the American Association of Individual Investors showed that about 55 percent of investors continue to remain bullish on riskier assets in 2021. That is due to an absence of high-yielding alternatives in cash and cash-based markets.

Bulls expect ultralow interest rates to continue supporting government bonds. Yields on them have fallen to near all-time lows. Meanwhile, the Federal Reserve’s accommodative fiscal policies, coupled with the US government’s relentless spending to aid Americans through the coronavirus-induced recession, has pressured the US dollar lower.

All and all, “There Is No Alternative” for investors but to pour their capital into riskier markets such as stocks, gold, and—indeed—Bitcoin.

The Bitcoin’s gravity-defying move towards $35,000 also came ahead of the Federal Open Market Committee’s (FOMC) minutes of their December 2020 meeting.

The Federal Reserve Chairman Jerome Powell said after their two-day meeting last month that they would continue buying bonds until the US labor market recovers from its dangerously high levels. This week, the minutes from that meeting would shed more light on the central bank’s strategy. 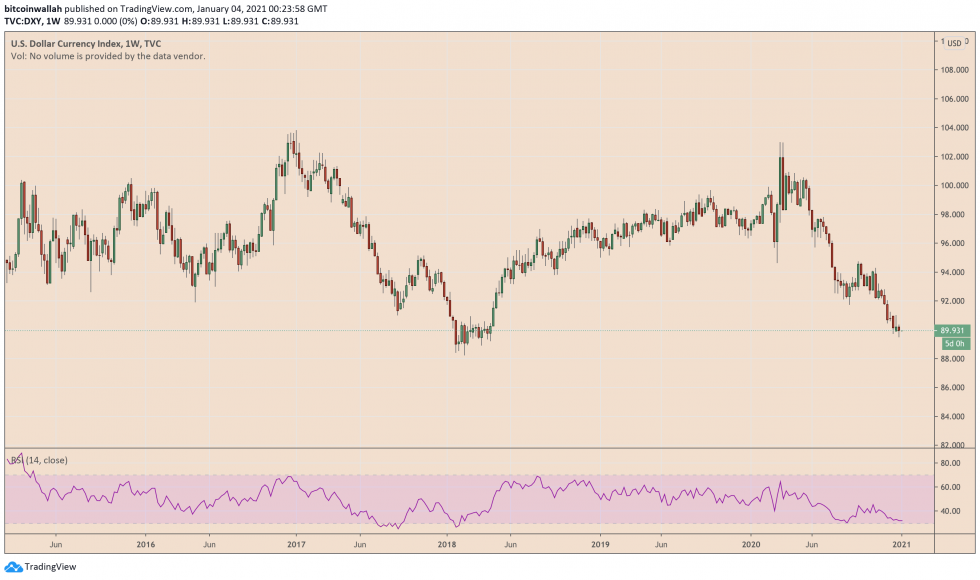 US Dollar Index expects to continue its downtrend. Source: DXY on TradingView.com

As usual, more dovish tones would keep the US dollar on its path downward, especially when it has already fallen by more than 12 percent against a basket of foreign currencies from its mid-March top. Conclusively, institutional investors have raised their bids for Bitcoin after listening to its anti-inflation, anti-fiat narrative for years.

“Many in policy/market-circles see the Bitcoin rally simply as a speculative bubble,” stated Mohammad A El-Erian, the chief economic advisor at Allianz.

“This shouldn’t obfuscate diverse reasons–liquidity, debasement, and inflation concerns; risk mitigation, institutional mistrust–bringing together a varied set of holders for speculators to pile on,” he added.

Away from its optimistic fundamentals, Bitcoin’s technical bias is turning more and more bearish due to its overheated rally. 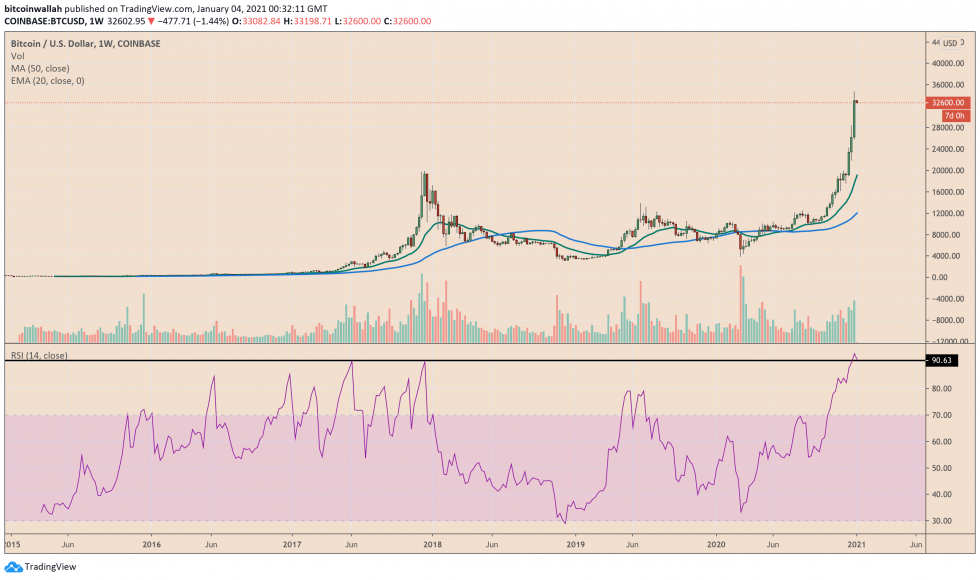 At this point, the cryptocurrency is screaming for a downside correction or an overextended consolidation move to neutralize its overbought levels, as confirmed by its weekly Relative Strength Indicator (RSI). Fractal-wise, Bitcoin’s previous flirt with RSI’s top levels had ended up in an 80 percent-plus price crash.

But many analysts believe that Bitcoin won’t crash this time. However, it may——end up correcting lower by 30-40 percent, only to create an ideal accumulation set up for institutional investors.

The parabola can end today!!

If parabola continues for 1 more month we will be at $70,000 before we correct

Overall, Bitcoin’s outlook this week wobbles between euphoric fundamentals and alarming technicals. The cryptocurrency could see a correction towards $30,000 to neutralize its overbought scenario. It may bounce back again to achieve another all-time high in the latter half of the week after the FOMC minutes on Wednesday.

Disclaimer: The article above is not financial advice.