Bitcoin is showing no signs of upside exhaustion despite continuous pullback warnings.

The flagship cryptocurrency broke north of $28,000 during the weekend session that helped it close the week 11.85 percent higher. Capital kept flocking into the 24/7 Bitcoin market as the rest of the financial industry snoozed itself for the Christmas holiday break. On Sunday, BTC/USD reached yet another record high level — of $28,387.

As the pair enters the new week, it looks at more upside catalysts to continue its prevailing rally. One of the biggest among them is the second coronavirus stimulus bill in the US.

President Donald Trump ultimately signed a sweeping pandemic-aid bill on Sunday night that would pave the way for Americans to receive economic relief as the COVID-19 infections surge across the country. He had objected to the legislation last week, demanding to increase the size of direct payments to Americans from $600 to $2,000 per adult.

“I am signing this bill to restore unemployment benefits, stop evictions, provide rental assistance, add money for PPP, return our airline workers [back] to work, add substantially more money for vaccine distribution, and much more,” Mr. Trump said in a statement Sunday evening.

Bitcoin’s first reaction to the president’s tweets was positive. The cryptocurrency climbed from its intraday low of $26,444 to as high as $27,339 after his tweet that read, “Good news on Covid Relief Bill.” Its bullish response raised its prospects of continuing its rally upward in the remainder of this week. 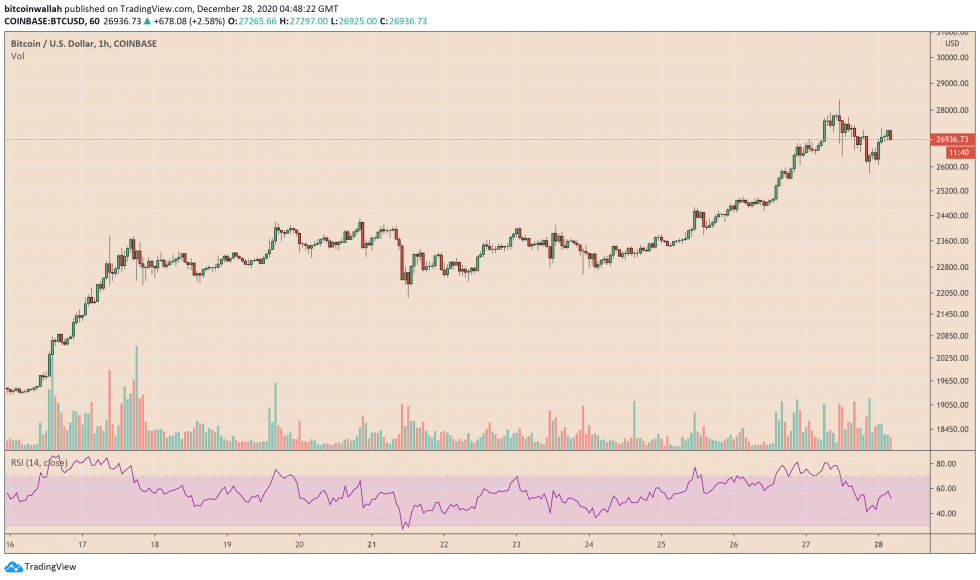 Stimulus efforts put additional downside pressure on the US dollar. As a result, corporations and individual investors tend to exchange their greenback reserves for safe-haven assets. Lately, many of them have purchased Bitcoin for dollars, believing its limited supply cap of 21 million tokens would protect them against fiat-infused inflation.

“What’s happening now—and it’s happening faster than anyone could ever imagine—is that Bitcoin is moving from a fringe esoteric asset to the mainstream,” Matt Hougan, the chief investment officer of Bitwise Asset Management, told Bloomberg.

“If it’s going mainstream, there is just so much money on the sidelines that is going to have to come in and establish a position that leaves me very bullish for 2021.”

According to its technical indicators on longer timeframe charts, the Bitcoin rate has become relentlessly higher.

The Relative Strength Indicator weekly and daily charts continue to alert about the cryptocurrency’s overbought status. But an aggressive buying sentiment torched by a flurry of institutional investments has offset those concerns. So it seems each one of Bitcoin’s downside corrections has met with an equal or overpowering bullish bias. 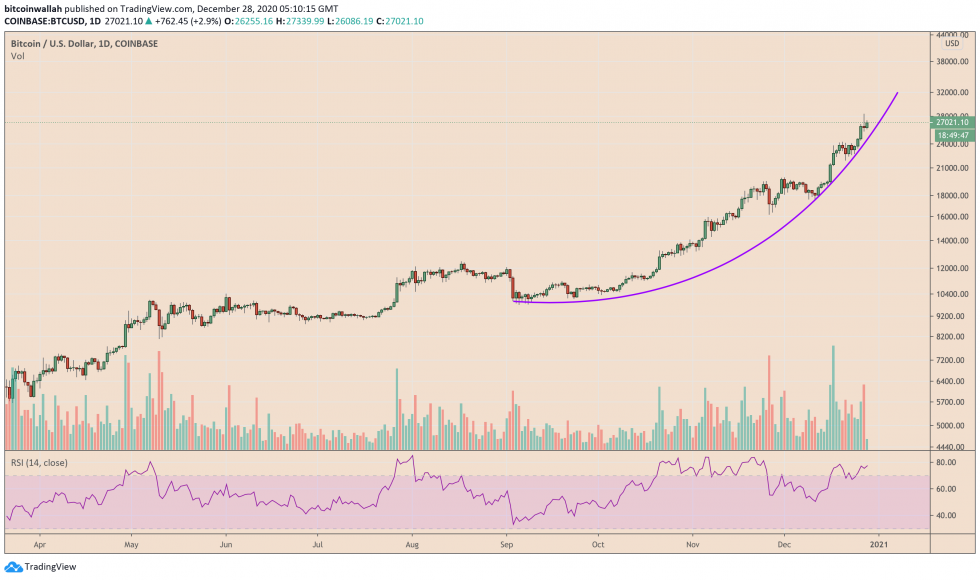 Bitcoin rallies higher while holding above its parabolic support. Source: BTCUSD on TradingView.com

Technically, Bitcoin needs to correct lower in the first half of this week to neutralized its overbought sentiment to a certain extent. That would also bring the price to levels that could create more bullish setups for traders in the short-term. Meanwhile, as the stock markets go offline during New Year’s eve, followed by the weekend later, the price could eye a run towards $30,000.

Cardano Creator Says XRP Is Not a Security, but Its Distribution May Be Problematic

Ethereum Rallies Above USD 700 While Bitcoin Consolidates and XRP Drops

Ethereum Rallies Above USD 700 While Bitcoin Consolidates and XRP Drops