The cost to purchase one Ethereum might exceed its previous record high this week.

That is, according to Josh Rager. On Monday, the independent market analyst said that he sees ETH/USD making a run towards the $1,250-1,350 area as resistance. Meanwhile, a clear breakout move above the said range would have the pair test its January 2018 high of $1,419.96.

Mr. Rager’s statements surfaced in the wake of Ethereum’s volatile price rally over the weekend and Monday. It surged by almost 60 percent, hitting $1,168.99 before turning lower towards $1,000 in its opening week move. Meanwhile, its market capitalization climbed to near $119 billion, making 13.68 percent of the overall cryptocurrency market valuation. 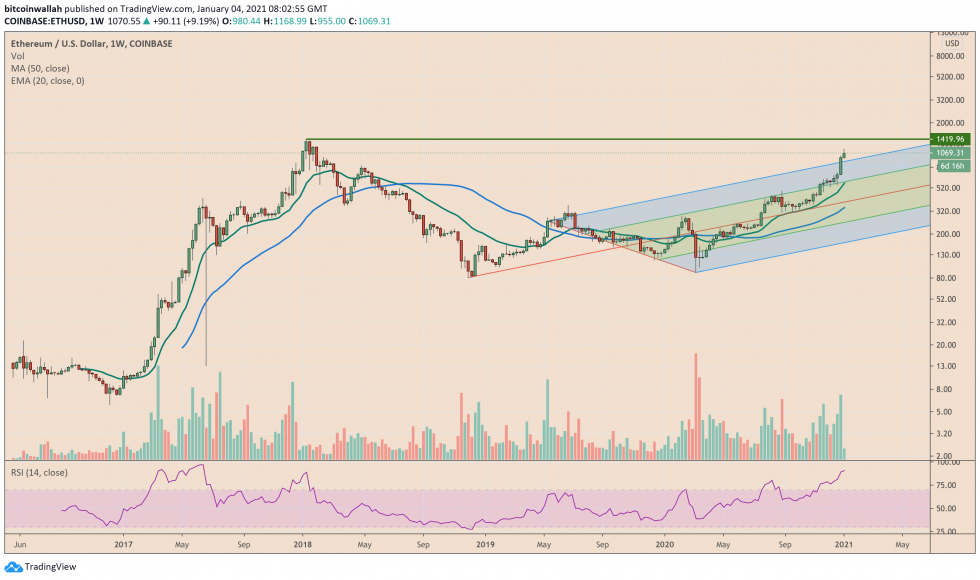 It is not clear what specifically caused the Ethereum bull run, but many analysts agreed that its gains emerged as a part of a so-called altcoin season.

Meanwhile, leading cryptocurrency Bitcoin corrected by approx 9 percent after hitting its all-time high near $34,500 on Sunday. Its market capitalization also slipped from 72 percent to 68.89 percent, signaling that traders decided to sell its top to seek opportunities in the altcoin market. It benefited Ethereum.

Ethereum also drew its bullish cues also from the anticipation of higher demand as its active supply runs dry.

Ki-Young Ju, CEO of South Korea-based blockchain analytics platform CryptoQuant, stated that the ETH reserves across all the cryptocurrency exchanges have decreased by 20 percent since May 2020. He noted that the supply might be going into decentralized exchanges, staking contracts, and self or third-party custodial wallets. 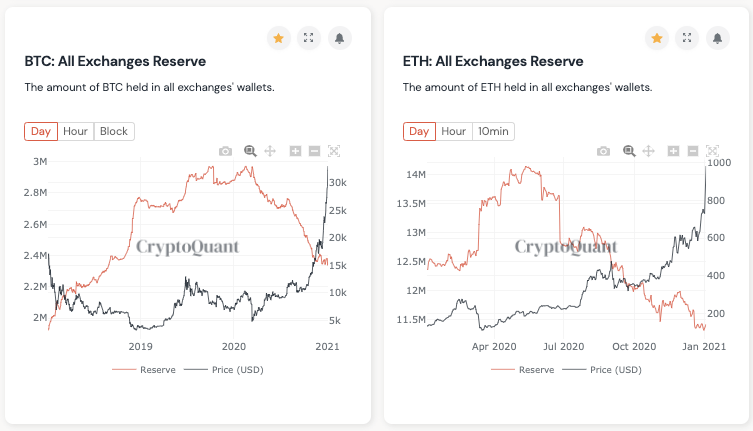 Data fetched from EtherScan shows that Ethereum’s very-own smart contract that powers its recent upgrade to proof-of-stake has locked about 2.2 million ETH out of supply. It is equivalent to $2.33 billion at the press time.

“Almost 2 percent of ETH supply is staked on the ETH2 deposit contract. I think this illiquidity makes the ETH price goes higher in the long-term,” stated Mr. Ju.

Meanwhile, ETH locked inside DeFi pools is about 6.97 million, according to separate data provided by DeFi Pulse.

The top two cryptocurrencies have remained strict competitors for each other. Bitcoin and Ethereum have always been at the neck...

The Cardano network has always been a fierce competitor for the Ethereum network. Naturally, this has translated into a prolonged...

Australians are already testing a CBDC. Surprising no one, considering the authoritarian way that the government handled the lockdowns. The...

Ethereum Cofounder Vitalik Buterin feels that other blockchains, such as Dogecoin and Zcash should be following the same strategy now...

Ethereum Supply Slowed After Upgrade, Will It Ever Trigger Growth?

The latest upgrade on Ethereum brought many changes to the crypto network. First, the Merge will improve efficiency and make...