Flare Network announces the snapshot date for its airdrop

As CNF reported, the announcement of the Spark token airdrop for XRP owners caused a big stir recently. For several days now, XRP owners have been able to use a tool for XUMM and the XRPToolkit to register their entitlement to the new Flare Network token. However, until yesterday it was not clear when the airdrop will take place or when the snapshot will be taken to determine the eligible XRP ledger accounts.

Yesterday, the Flare Network team announced that the snapshot for the distribution of Spark tokens will take place on December 12, the 194th birthday of Martha Jane Coston (1826-1904), an American inventor and businesswoman. Coston is best known for the invention of the Coston torch, which was used for signalling at sea, and after which the current “Coston testnet” is named, which was launched in May. Via Twitter the Flare Network Team wrote:

We named our testnet after Martha Coston who invented the maritime Flare. The snapshot of the XRP ledger for the #Spark distribution will be taken on the 194th anniversary of her birthday – December 12th 2020.

Since the announcement of the airdrop, the Flare Network has received massive positive feedback from the XRP community. The network, which is developing a bridge between Ripple’s XRP Ledger and Ethereum and wants to integrate smart contracts into the XRP Ledger, is currently experiencing a steep increase in the number of XRP addresses signing up for Spark token distribution.

The latest statistics released by Flare Network’s official media channels show that the airdrop is supported by more than 15,000 accounts with over 900 million XRP. However, only 1.7% of all eligible XRP tokens have taken the necessary step to claim the Spark token. Still, this rate could rise rapidly if larger exchanges support the airdrop. 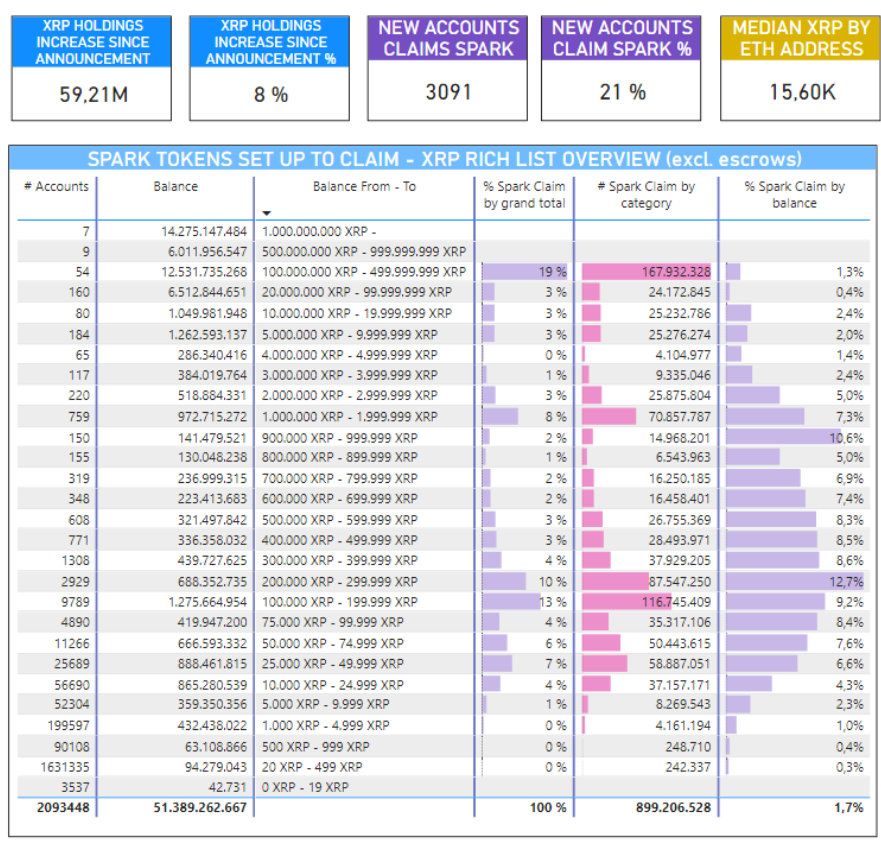 So far, only the exchange Bitrue and AnchorUSD have announced their support, with more exchanges likely to follow. Otherwise, Xrplorer, an analysis tool that tracks on-chain processes in the XRP ledger ecosystem, revealed that the Coinbase cold wallet may have claimed Spark, but that this is “still very uncertain”.

How many Spark tokens can XRP owners expect?

As CNF reported, all XRP owners except Ripple Labs and certain former employees of Ripple Labs will be able to claim the Spark token. Once the snapshot is taken on December 12th, these addresses and all exchange addresses that do not support the airdrop will be removed from the pool of entitled addresses. Accordingly, about 45 billion XRP are eligible to participate in the airdrop (minus the exchanges that do not participate).

As the CEO of Flare Networks, Hugo Philion, explained, this will result in XRP holders being able to receive the Spark token at a higher ratio than 1 XRP = 1 Spark token:

The right to claim the 45 Billion Spark tokens will then be apportioned to each remaining address according to their proportional XRP balance in the snapshot. This may result in valid claimants receiving more than 1 Spark token for each XRP token that they hold.

Ethereum hits $473—and strategists are more bullish on ETH 2.0 than ever

Ethereum hits $473—and strategists are more bullish on ETH 2.0 than ever