Bitcoin is currently consolidating within the upper-$11,000 region. This is around where it has been for the past few weeks – with all breakouts proving to be fleeting.

It is important to note that this consolidation has done little to offer investors with insight into its near-term trend.

That being said, one analyst is noting that bulls are still in full control of the cryptocurrency so long as it maintains above its cloud formation.

This level has been tested and respected on multiple occasions since BTC first began climbing from lows of $8,000.

As a result of this, analysts are still expecting Bitcoin to see some imminent upside in the short-term.

At the time of writing, Bitcoin is trading down just over 1% at its current price of $11,720. This is around where it has been trading for the past three weeks.

The one exception to this was earlier last week when the cryptocurrency pushed as high as $12,400 before it lost its momentum, consolidated for a couple of days, and then fell back into this trading range.

Analysts do believe it may be poised to see some upside, however, as one recently put forth a chart showing that the support at $11,700 may be enough to spark another test of $12,000.

“Bitcoin – Well, if this is going to hold for a range high re-test, it’s going to have to do it here. Therefore, I’m scalping this long- probably for the last time in a while,” one trader explained.

This Technical Pattern Shows Bulls are in Control of BTC

Bitcoin’s cloud pattern is spelling trouble for bears, as it shows that the cryptocurrency is still firmly in bulls control.

One analyst spoke about this pattern in a recent tweet, saying:

“Greater trend is bullish as long as daily continuously closes above/within the cloud. Has been doing since 8k (115 days)” 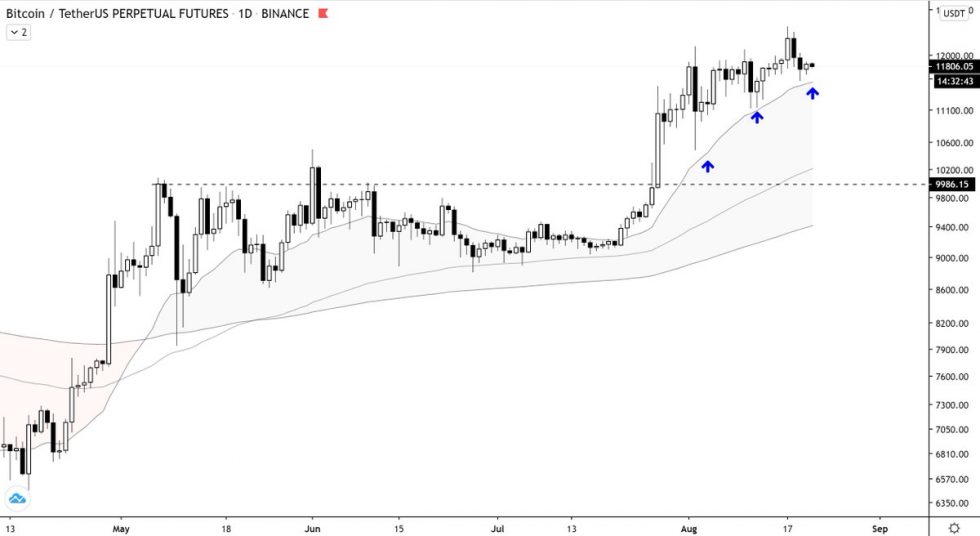 The coming few days should reveal just how strong bulls truly are, as a weekly close above the cloud could bolster Bitcoin’s short-term outlook.